BORA Pure is Kuluttaja magazine’s 2021 test winner in induction cooktops with an integrated extractor in both recirculating and chimney extractor device groups.

Kuluttaja magazine tested 76–83 cm wide induction cooktops with an integrated extractor, altogether 14 models. The tests were conducted separately for recirculating devices and devices that are connected to chimney. 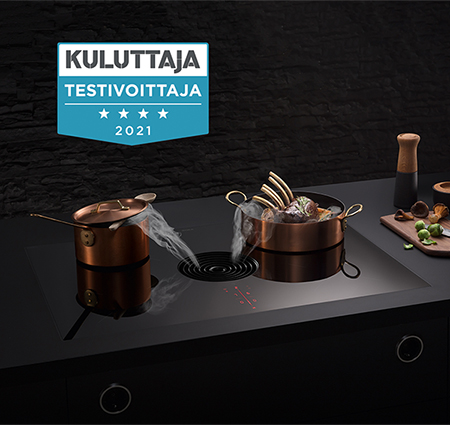 BORA Pure won the test in both recirculating and chimney extractor device groups. Both BORA Pure devices were the most effective ones in their test groups.

The recirculating BORA Pure (PURU) was the most silent in the test. Its extractor also filters both odours and grease excellently. The BORA Pure connected to chimney (PURA) in turn got the perfect grades in extractor capacity tests. The extractor removes over 90 % of grease particles released during cooking.

Both devices had good scores in cooktop capacity tests, and both got good grades also in usability. Neither BORA Pure device got any bad scores in any test area.