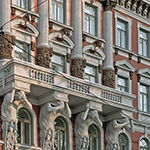 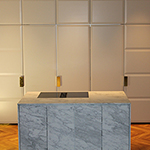 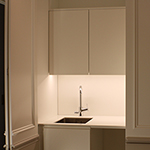 Grand Residence 21 is a prestigious Belle Époque house from the end of the 19th century in Ullanlinna Helsinki, previously called Ohrana house. The protected residential property in Korkeavuorenkatu 21 was carefully renovated to its former glory. Now it has over 2000 m2 of luxurious living space and offers carefully tailored in-house services and amenities for its residents.

Savo delivered together with Ergo Kalusteet Oy HAWA Concepta, Concepta Folding and Multifold mechanisms to the luxury apartments. The kitchen sink and oven for example are hidden behind sliding doors equipped with Concepta and Concepta Folding mechanisms giving the kitchen a polished look. When opened, the hinged doors slide neatly into the frame of the cabinet, so they don’t take any space in the kitchen.

The utility space is also hidden behind doors that masquerade as a beautiful wall structure. Thus, for example the washing machine can be kept on view only when it is needed and otherwise hidden. The utility space doors are equipped with Multifold mechanism.